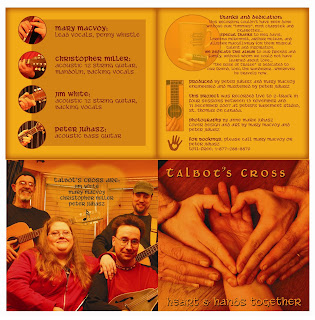 Here's part of the Liner Notes that I designed for my band's cd recording.
We wanted to have a recording that we could give to family and friends for xmas last year and we worked really hard on it.
Chris, Jim, Pete and I were very pleased with how it turned out.
I don't know if I would say that we were as pleased with some of the "less-than-wowed" response from some family members, but you know what? In the long run, that really doesn't matter.
It was worth doing!
I'm thrilled to be working on a musical creative project with my husband, Chris, and it's an honour to be playing with such fine musicians. We didn't start this to "become rich and famous", we just wanted to create something good. At the end of the day, that's not such a bad thing.
(...now one of these days I'm going to figure out how you share musical files!)
Posted by MizMerryMac at 10:13 PM