Change can be painful...but good! 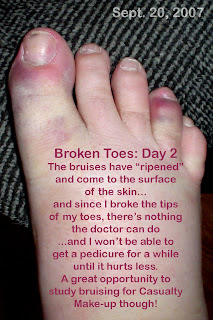 2007 was a time of change and the changes continue!

In the fall, I had a bicycle accident (see hideous broken toes pic) that tested my resolve to quit working for "D's". I'd had enough of that situation and since my "boss" wasn't interested in compromising at all or recognizing the wisdom of my requests, I had no other choice.

So in 2007, along with some uncomfortable events, some very neat things happened too where I was acknowledged for my artistry and creativity;

1) In May 2007, I won 1st place in an international contest for facepainting for my Tiger make-up job at www.facepaint-uk.com.

2) In August 2007, I won 1st place in the London Beadery's Creative Bead Competition and won a $200 gc for the store! Here's the link: http://www.londonbeadery.com/com2007.html I was particularly pleased with this since the year before, I had bought a kit to enter the contest and then just not gotten around to getting anything done on it!

3) In October 2007 (just as my arm was about back to normal for facepainting again) I was invited to design a step-by-step for the first issue of brushstrokes magazine. http://brushstrokesmag.com/ I created a Halloween face design, and my friend, Anne Marie generously agreed to model for me.

These events made me feel better about changing my work situation. I was hired on by some friends to manage their office for about three months at the end of 2007 and that showed me that I was really capable of so much more than I thought.

Now I'm looking at 2008 and planning for the year and working on giving my creativity more scope.

Inspired by my win in the London Beadery contest, I've been exploring felt-making and embroidery, and I entered a contest with http://www.beadingdaily.com/.

I'm also interested in putting things for sale up in a shop on http://www.etsy.com/ . It's a great site that celebrates creativity and artistry that's devoted to the sale (by the Artist) of hand-made items. I'm working on putting a shop together with my friend Tish, who is really into knitting. She's made a lot of really cool purses, hats and socks that she's planning to sell.

Posted by MizMerryMac at 7:11 PM