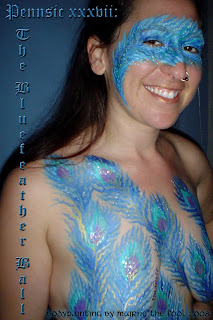 America is indeed a litigeous society and as such, I did not facepaint/bodypaint at Pennsic 37 as I had hoped to...

Turns out that even buskers have to have liability insurance for this Event now and I was not prepared for that this year.

As a result I only did one painting at Pennsic 37 and that was for a new friend who was attending the Blue Feather Ball. I'm glad that I was able to help her out, as I had just slipped and fell in the mud that same day and gotten a "royal" bruise on my knee and pulled my groin badly.

This painting was done with Wolfe Bros. makeup so that it would "stick" a little better and defy any possible rain that night. By all reports afterwards, my friend had a lovely time and wowed many.

I had a great time at Pennsic getting to know old friends better and making some wonderful new friends. I'm really looking forward to next year! I think that the Journal my husband asked me to keep for him so that he could enjoy the Event vicariously was a success and I managed to meet at least one person from every kingdom in the Known World of the SCA. I think he's going to want to attend for most of two weeks next year. Pennsic 38, here we come!
Posted by MizMerryMac at 1:39 PM